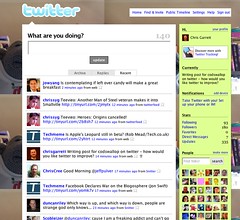 Twitter is a social site based around the idea of 140 character messages, but it has grown to be much more than that.

My relationship with Twitter has mutated over time. My opinion of the service has ranged from true believer, skeptic, objective critic, right up to now which I would describe as “cautious optimist“.

It took a while for me to see any benefit in it but now I think it could be very useful to bloggers when used correctly.

If you are not using Twitter yet, there is a comprehensive guide here.

The service is still developing, both technologically (it is often down or unreliable) and in the way people use it. There are three great non-social uses for Twitter that I can see:

Twitter is more and more being used as both a social medium and also as a way to drive traffic. You can see this in action by observing users who do it so well, people like Tamar, Chris Pirillo, Scoble and Steve Rubel.

The key is to paste your link after a compelling headline. I find titles that either announce something intriguing or beg a response to work best, things people will have an opinion on. You can use Twitterfeed to post your RSS content to twitter automatically, or various plugins to Tweet as you post. Another traffic technique is to post Digg URLs to get your followers to vote!

It is no good thinking you can drive loads of traffic to your blog if you only have five followers, you have to get out there and make some friends. See “networking” below.

Originally when I signed up I did the usual thing of following my friends. Thing is, I talk to my friends anyway. What I missed out on was what I find really beneficial now, finding stuff out as it happens and getting insights that I would miss otherwise.

The key is to follow the right people. This can only be worked out through trial and error; follow people for a while and see what they produce.

Be careful that you do not follow more Twitter users than you can handle, this kind of thing can really leach on your time. The way I have gathered contacts is by gradually following other peoples conversations and following who they reference. You will find a lot will follow you in return or if you reply to one of their comments.

It is very important when replying to remember that your conversation is public, keep it interesting for those outside the conversation too by making it inclusive. Be clear in each “tweet” what it is you are talking about, don’t expect people to follow the whole thread, do not post too much in quick succession and don’t use shorthand or private jokes.

To reply to another Twitter user you just include their @name in your Tweet. To see who replied to you there is a “replies” link.

I asked on Twitter if people find the service useful, here are a few replies:

Over to you, do you use twitter? How do you use it? What do you love or hate about it? I want to know your opinions, please share in the comments …