You are here: Home / Business / Is it Just Business? How to be Professionally Human 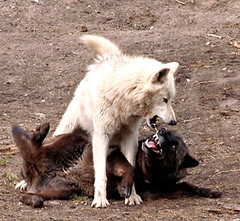 Have you ever worked with someone who uses the phrase “It’s just business“?

Or played a game with someone who, after cheating, back-stabbing, lying or just being a jerk, said “It’s only a game“?

How did that make you feel? Did you respect the person more, or less? Did you trust them more afterwards?

When someone is an aggressive, shouting, mean bully, do you say “Well, that’s just how they are. A straight-talker!“.

Last night I wrote and re-wrote this post in my head.

I wanted to rant. It’s not my style. But woah … I wanted to. Instead I want to turn my anger into a positive and show you how you can forge better relationships and be more professionally human in your interactions.

I’m angry right now, but not angry for myself. I am feeling upset on behalf of my friend Ben Eadie, one half of Mechanical Mashup, and all round top bloke.

Rather than demonstrating their brain power, two of the contestants have taken to back-stabbing, aggressive behaviour, bending the rules, and other associated d-baggery.

Now, the thing is, these reality shows always have to cast a villain or two. The only way you are going to root for the good guy is if there is a bad guy for the good guy to go up against. We know this. There is no shortage of people willing to take on the role with gusto.

In the short term, they might succeed. They might even win the whole thing. It would reflect poorly on the show and the Discovery Channel, but they might.

The problem is, after the show is over, people still remember who was a jerkface, and who were the nice ones.

I don’t think they got up each morning thinking “I get to be the bad guy today, yay! Let’s go bully a contestant!”.

Those lapses of judgement, visible for the world to see, however, will stick.

How does this apply to your blogging and business?

People Don’t Always Remember What You DO … But …

These guys on CGKIA now have to live with the fact that thousands of people in Canada will remember how they made them feel. This will be further amplified and distributed by social media.

I nearly named them in this article, but then what if I started ranking in search for their names? That would compound the issue and make my behaviour appear just as bad as the bully behaviour they demonstrated, but longer-lasting (the internet never forgets).

Of course, Canada gets to see what a great guy Ben is too, which has kind of a nice karmic balance to it.

Business is Business, But …

Business is business, yes, but business is also personal.

I am repeatedly accused of being too nice. Being too soft. I can’t count the number of people who think that my wife and I should “just toughen up”.

There is nothing wrong with being sensitive. It’s people who lack empathy who are the problem. People who think treating others badly is just “straight talk”. People who think being tough as nails is somehow professional.

But the good news is people remember how you make them feel.

You know what happens when people make a habit of being a jerk? Well, I am not sure, because people don’t associate with those people for very long, so they fade into obscurity when nobody is willing to prop them up any longer.

We want to work with people we know, like and trust.

Bad actors shine brightly then fizzle out as people detect their true nature. The nice people win in the long term:

Just think of the people you enjoy following and keeping up to date with. Do they seem like nice people for the most part? Could you shake their hands without needing a shower afterwards?

But it’s not pretending to be nice, it’s being a genuinely good human being, because faking it can only last so long.

Who would you rather work with after the show ends, the mean bullies or super nice and resourceful Ben? Even if the folks with the bad behaviour wouldn’t act like that in normal life?

So, if it’s not about being a hard as nails super-competitor, what is it about?

What do people say about you behind your back?

That is your brand.

What are you doing about it?